Levi Jackson Wilderness Road Park is a city park located just south of London, Kentucky in Laurel County. The park encompasses 896 acres and includes a section of the Wilderness Road that early settlers used to reach Kentucky. The park is named for Levi Jackson, an early Kentucky pioneer. It serves as both a recreational and historic park.

Levi Jackson Wilderness Road Park combines the beauty of a rolling, wooded hills park with a historic site that honors the pioneers who braved the perils of the wilderness to settle Kentucky. 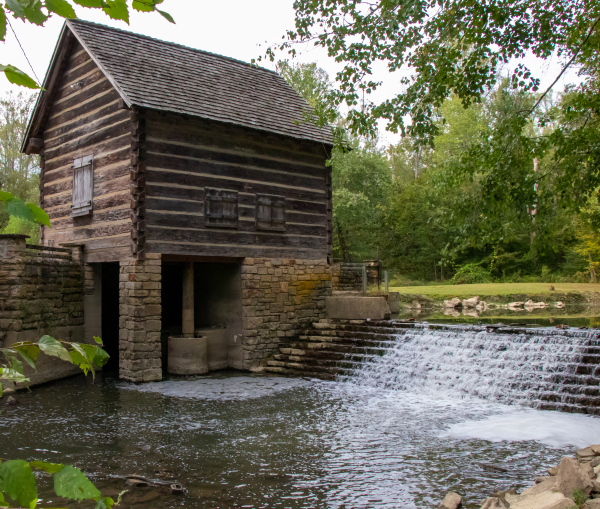 The historic Wilderness Road was the main route used by settlers for more than 50 years to reach Kentucky from Virginia. In 1775, Daniel Boone blazed a trail for the Transylvania Company from Fort Chiswell in Virginia through the Cumberland Gap into Kentucky. It was later lengthened, following Native American trails, to the Falls of the Ohio at Louisville. The Wilderness Road was rough and steep. In the early days of the trail, it could only be traveled on foot or horseback. As more travelers passed, the road improved and horse-drawn wagons were able to follow the trail.

On November 13, 1837, a 21 year old Levi Jackson married Rebecca Freeman, daughter of Revolutionary War veteran John Freeman, who had been in this area (then part of Knox County) operating Freeman Tavern on the Wilderness Road since 1803. After the death of John Freeman in 1841, and his wife, Rebecca, in 1849, daughter Rebecca and husband Levi,  inherited the Freeman property.

The Jacksons continued to operate the farm and tavern for many years. After the death of Levi in 1879 and Rebecca in 1897, the property remained in the Jackson family. In 1931, descendants donated the land for a state park to Kentucky to honor the Jacksons, Freemans, and the pioneers who helped build Kentucky.

The park facilities were constructed during the Great Depression in 1935. The National Park Service spent $55,000, building cabins, foot-bridges, parking areas, an auditorium, and observation tower. Additionally, the Civilian Conservation Corps restored an old log cabin and built McHargue’s Mill in 1939.

The Mountain Life Museum, a park attraction that brings visitors into a pioneer settlement, is open Friday and Saturday. Buildings in the settlement were moved from other sites or built as replicas on the park. All buildings are filled with lots of pioneer relics including tools, products of agriculture and household implements. The museum consists of 7 buildings – an excellent attraction to visitors of Levi Jackson Wilderness Road Park.

There are also many other attractions within the park, including a campground, several shelters, mini golf, community swimming pool, and Treetop Adventure – an aerial treetop adventure course.

During the last quarter of the 18th Century, more than 200,000 pioneers visited Kentucky by following the Wilderness Road and Boone Trace. Today, hikers can retrace those footsteps on two hiking trails – a total of 8.5 miles in length.